Build & Learn is a construction set that we have developed for daycares, kindergartens, and schools.
We believe that toys should be able to endure rough play and that children should be able to move and play with the figures they build. That is why Zpiiel elements are made from hard plastic and have ball joints.
Childcare providers and clinics are already using Build & Learn to train childrens fine motor skills, memory, eye-hand-coordination, sensory stimulation, and understanding of shape and colour.
The Zpiiel Build & Learn series helps children develop their early literacy and early math skills to better prepare them for the next chapter in their lives: school. In the series you will find three focus areas: The Alphabet, Numbers and Measurements, and Shapes.
Focus on early math skills with Numbers and Measurements or Shapes, on early literacy with The Alphabet, or order the whole series for an allround experience.
While each product has a specific focus they can also be used for child-initiated play where the children decide what to build using only their imagination.

What if you in less than two minutes could start a game that develops childrens’ early literacy. A game that is simultaneously fun for
the children, grabs their attention, and prepares them for the challenges they will meet when they begin school. Truly, is there anything
more satisfying than watching a group of children playing while they don’t even notice how much they are developing their language
proficiency.

That is the sort of game we are offering. Zpiiel has cooperated with experts in childrens’ early literacy in order to develop this product.
Children will develop their language skills while playing with the construction toys that can be used to build letters, numbers, shapes
and figures. Included with this building set are four inspiration sheets that have been developed specifically for this build set by experts
in early literacy. When children play with this set, they will simultaneously expand their language skills and activate a variety of other
senses and skills.

While children are not expected to learn how to read and write in kindergarden, they are laying the foundation of their reading journey at
that age.

Learning to read and write is far from easy. But by playing with letters children can practice skills that prepare them for the major task of
learning to read. We call it early literacy and it plays a big part in preparing children for school. Early literacy includes:

It is the combination of these aspects that prepare children to read. Because of this, those are the areas that the following activities
focus on. This product is meant as an easy tool that you as an educational staff member can use in your everyday work with children’s
early literacy

Play and Learn
Playing is an incredible way to get to know written language and develop strong written language skills. Children are naturally curious
about letters and writing, and meeting them in their interest and reacting to it as an adult goes a long way. The Zpiiel elements can be
used both in child initiated play and in planned educational activities.

Play with all senses
When you play with Zpiiel letters a lot of senses come into play: Children can touch, look at and manipulate the letters. Furthermore,
when adults join actively you can include the hearing sense. One way to do that is by mentioning the name of a letter that has caught a
child’s attention as well as the sound it makes.

The fact that the letters can be manipulated means that they are ideal for training phonological awareness. If a child needs to figure out
which sound is left if they remove ‘c’ from the word ‘claw’ it becomes a very abstract exercise. However, when they can physically remove
the ‘c’ it becomes tremendously easier for the child to understand. By using physical letters children will understand that the letters and
the sounds they make work in much the same way as building elements; you can put them together in a lot of different ways and pull
them apart as well. Physically holding the letters in their hands is especially important for children who learn best when they can make
use of their sense of touch. With the Zpiiel elements they can not only see the letters but use their tactile sense to feel the shape of the
letters.

Your imagination is the only limitation
With this product you build the letters yourself using the building set, and you can easily involve the children in this. The elements have
ball joints which means that it is easy to change the shape of the letters. Often early literacy activities for children only include the
capital letters even though a majority of the letters children meet in their day to day life are small letters. With these elements you can
build both capital and small letters. The focus of this material is early literacy but children can freely play with the elements and use it
as an open play construction toy and build anything they want. 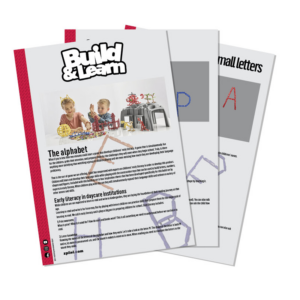 We accept the following payment